The brand Saint Luis Rey appeared in the Registry of Exporting Manufactures in 1940 under the ownership of Zamora y Guerra located at 810 Maximo Gomez Street, Havana.

There are two versions of the origin of the name. The most popular is that it was named after the famous novel ”The bridge of San Luis Rey”, by American writer Thorton Wilder in 1927. The novel got so famous that it was made into a movie in 1944. The second is that the fincas were located at the famous San Luis area in Vuetla Abajo, and a Rey, which means ”King” in English, was added. The name means ” King of San Luis”.

Production continued after the Revolution. In 1960 a new contract was signed between Cubatabaco and N.R. Silverstone Cigar Limited, UK.

According to the contract, Cubatabaco could only export this brand exclusively into the UK and N.R. Silverstone Cigar Limited could not re-export the cigars outside the UK. Nevertheless, Saint Luis Rey cigars appeared in other countries due to ”international trading”.

This exclusivity was lost in the 1990s. Cubatabaco began to export the brand worldwide in 1993.

Saint Luis Rey cigars have a unique unmistakable ”Saint Luis Rey” aroma which suggests that the cigars are made from tobacco from a unique area. ”Bean flavors”(cocoa, coffee, vanilla) and subtle honey sweetness are also present, to a different degree in different models. A hint of grassy aroma and very subtle saltiness is also present.

The ”bean flavors” seem to be most pronounced in Serie A, and ”the honey sweetens” in Londales.

Cool cigar stands you can buy in 2020 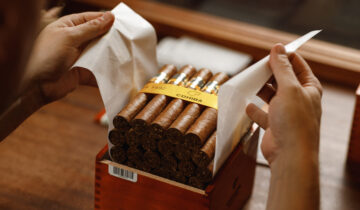 What Are Cigar Flavours And How Are They Created?