The largest portion of the world’s rum production comes from the Caribbean and Latin America. It was for many years closely associated with Cuba. Rum is distilled spirit made from sugarcane juice or sugarcane by-products, such as molasses. The juice is fermented, and then distilled. Rum is most made at approximately 80 Proof.

The rums made from the sugarcanes of Cuba helped make fine rum world famous. Many famous producers today originated in Cuba, such as Bacardi.

Like whisky and other potent potables, there is a market for the finer versions of this spirit. And it had its aficionados. Fine rum is an impressive drink. Firstly, they are made from molasses. Molasses makes the best, high quality rum. These rums are barrel aged and can be served in brandy snifters or whisky glasses. They are drunk neat or on the rocks. They give off impressive aromatics, filled with oak, stone fruits, raisin, honey, apricot, and honeysuckle, among others. They are not sweet, but rather, gorgeous elixirs.

For many years, there were varying traditions on what to sip while enjoying your cigar. Port? Brandy? Whisky?

Winston Churchill was famous for liking brandy and cigars. A frequent guest at Churchill’s home Chartwell once remarked, “He is an exceedingly kind and generous host, providing unlimited Champagne, cigars and brandy”.

Americans seemed to favour whisky and cigars. Men like Ulysses S. Grant and Mark Twain made this combination famous. Mark Twain once quipped, “Too much of anything is bad, but too much good whiskey is barely enough”.

But when in Cuba, savouring a fine Cuban cigar, the idea of sipping port, brandy or whisky is unthinkable. In Cuba you savour a fine, barrel-aged rum. One of the most popular terms you will notice as you start investigating Cuban rum is the term “ronañejo” which essentially means “old rum”. Here are some wonderful rums you should look for:

Ron Edmundo Dantes is among the highest quality rum brands today. The name of the brand comes from the famous novel by Alexandre Dumas, The Count of Monte Cristo. This prestigious Cuban rum is made in Santiago de Cuba. They manufacture only 3,000 bottles annually. They produce two products: a 15-year-old and a 25-year-old rum. This 25-year-old rum is golden in colour and known for its smooth taste with strong hints of vanilla. The 25-Year-Old Gran Reserva bottle is decorated with 24 carat gold. The stylish package no doubt is reminiscent of the Montecristo cigar brand.

Havana club maximo extra anejo Havana Club was founded by the Arechabala family in Cardenas, Cuba in 1878. They created the Havana Club brand in 1934. Havana Club is the largest producer of Cuban rum. Under the Pernod Ricard umbrella of brands, Havana Club is the fifth – largest rum brand in the world. The distillery now produces almost 4 million cases a year. Maximo Extra Anejo is a non-vintage rum, but it is blended from a series of older rums, aged in oak casks. It is among the most expensive rums in the world. Oak, smokiness, vanilla, and caramel come across the nose with dried stone fruits. Hints of dark chocolate as well. Spicy finish.

Hey! Is that Cuban Rum from the UK and France?

Several European distillers have taken Cuban – made rums and aged and bottled them, releasing them into the marketplace. Here are a few examples of high-end, high-quality rums.

Sancti Spiritus 14-Year-Old. This is bottled by English whisky producer Duncan Taylor. It is aged in oak, but Sancti Spiritus is special – it is among the only single barrel aged rums in the world. This is very limited bottling – less than 250 bottles. A unicorn aged rum. Highly prized.

La Compagnie Des Indes Cuba 16-Year-Old Vintage. Compagnie Des Indes is a French company founded by Florent Beuchet, whose family owns the Emile Pernot Absinthe Distillery. He has bottled many vintages of aged Cuban rum. Any one of his Cuban rum bottlings is well worth seeking and trying.

So, sit back, pour two fingers of aged Cuban rum in a snifter or whisky glass, and set it right down next to you as you begin to contemplate that Cigar…

You can check out our range of New World and famous Cuban Cigars available on The Cigar Holder Shop. 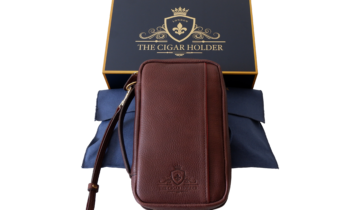